As part of a Technology Insertion program, NMCB-5 is launching several platforms to increase their tactical and engineering effectiveness. Gantz-Mountain Automated Surveillance is one of those platforms. It provides an expeditionary small-footprint ground tactical intelligence-gathering system that helps the Seabees gain information about enemy movement and behaviors in the area.

“The system addresses one of our constraints, which is maintaining situational awareness and intelligence gathering capabilities under low manning constraints, “said Lt. Diep Nguyen, NMCB-5’s technology insertion officer. “Less people will be required to provide the same, if not better, monitoring of our defensive lines.”

NMCB-5 is the first Navy command to work with the system in the field. The Seabees got hands-on, deploying the expeditionary surveillance technology during field operations. The system offers integrated high-resolution day, low-light and thermal cameras for 24 hour capability in all weather conditions. Also, the camera systems provide automated behavioral analysis, which enables enhanced threat detection capabilities. By leveraging this system, the Seabees could augment their personnel manning and improved night time operations.

“With the new long-range system that I brought with us, you guys are the second tactical unit to work with it,” said Greg Wilson, retired Army Special Forces colonel and vice president of Gantz-Mountain Intelligence Automation System, Inc. “We’re integrating it in, so you guys can work with the technology which can detect threats 4-7 KM out. We’ve only just fielded them to the Army Rangers.”

The MT-5-R system brings cutting edge, smart surveillance capabilities for force protection applications. Each of the five camera systems gathers analytics. They are screening for threat behaviors, looking for vehicles and personnel who are moving in the sectors where the cameras are set up. It enables the battalion to create a security bubble around the camp location.

“You guys go do expeditionary construction, small teams, so you need that security, you don’t have the manpower,” said Wilson. “And once you set it up, it’s autonomous. You don’t have to be watching it. We have a function where you get an audio alert. So you can be doing your work, and a chime would queue you to look over.”

Because these camera systems have automated detection, it improves on manpower and efficiency over traditional surveillance methods by offering better visuals and removing troops from enemy lines, allowing for more efficient intelligence gathering and force protection.

“So you can get these things deployed out, picking up threats early, so that you can posture your defense plans based on that intelligence,” said Wilson. “And that’s what we’re doing with the [U.S. Army] Special Forces teams.”

NMCB-5 is homeported in Port Hueneme, California. During the homeport phase, the U.S. Navy Seabees train on high-quality construction, expeditionary logistics, and combat operations to support U.S. and partner nations and deter aggression. 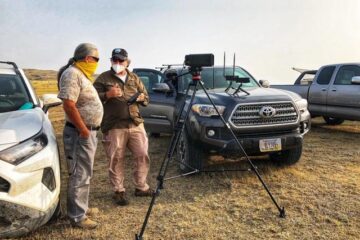 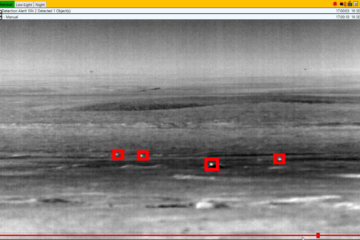 Gantz-Mountain is exited to be under a contract with the U.S. Air Force for a Phase I  Small Business Innovation Research (SBIR) project under Topic J201-CSO1 – Open Call for Innovative Clear Defense-Related Dual-Purpose Technologies/Solutions Read more…